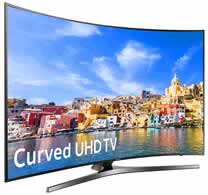 
Initial Thoughts
This UN43KU7500 television reaches a 86 rating, based on specs and features. The 43 inch screen and 4K resolution are a couple of features that the rating is derived from. This particular model also offers 4K Ultra HD TV, Curved Screen, Auto Depth Enhancer. This is just some features of this TV. Check out the specs page for a full list. Each consumer feels strongly about different specifications as it pertains to features of a television. It is because of this that you should take a good look at each TV.

A TV with Curves
This TV features a curved screen which can put you more in the action when watching movies or sports or even gaming. It is really just a personal preference on whether you would enjoy a curved screen. Due to the nature of the curve it would be much harder to view the screen for people sitting from either side. This may be a deal breaker for some. Either way, the curved screen on the UN43KU7500 seems to provide more depth as it pertains to what you are watching on TV at the moment. This is probably the only advantage of viewing movies and shows with a curved screen.

Input This, Output That
A quality picture is determined in part by the type of input that is connected. This TV is produced with 3 HDMI ports , 1 component input , 1 composite input , 2 USB ports , 1 audio-out port , 1 RF cable input , 1 ethernet port and WiFi. Three HDMI inputs should be fine for most households. The old composite style connections are rarely supported anymore for a good reason, it is ancient technology considering televisions of today. Component inputs are still used by some Samsung televisions because of the fact that they can transmit HD resolution. This Samsung TV has built-in WiFi which means you are able to connect wirelessly to the online world. This gives you a multitude of possibilities with your Samsung television. An Ethernet port means having another way to get online. Connecting through an Ethernet port is a more stable connection and will typically be faster than WiFi. All in all, the hardware of a TV has proven to be as significant as the screen itself. HDMI port type, WiFi connections, and even the audio out connections will determine what kind of shows you watch as well as the quality. Researching and buying the perfect TV can be difficult. It is always a good idea to check out the entire TV, not just the screen size!

In or Out
The resolution of this TV is 3840 x 2160 pixels. This is typically referred to as 4K resolution. The term resolution means how many pixels wide x how many pixels high the screen displays. The screen resolution is the single biggest factor which defines the quality of the picture on the screen. Though refresh rate, type of backlighting and type of LCD panel all have an effect on display quality, too.

Smart TV
This Samsung television is a Smart TV and has Tizen 2.4 installed as its main OS. There are quite a few applications that can be installed and ran on the UN43KU7500 TV. The Tizen 2.4 system offers a lot of apps for you to install such as Twitter, Amazon video, Showtime, Netflix, and many more! Because of the fluid nature of system apps and possible legal licensing crap, there may be different apps available today than what was listed. Make sure to familiarize yourself with the Tizen 2.4 system before making a financial decision. It is difficult to know until you make the decision to do research on the operating system prior to buying the TV.

Bigness
This 4K TV boasts a 43 inch screen measured diagonally. Most of the time the screen size is actually smaller than the one listed. The UN43KU7500 has an actual 42.5 inch screen. This 43 inch Samsung TV is a perfect size to place in a main living area of the home. Because of the average size of this TV, it is useful around the house because it can be placed in almost any room. Despite the size, a person should pick a TV that has all the features you need.