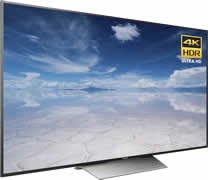 
The Essentials
The XBR-65X850D by Sony tops out at a 87 overall rating, based on specs and features. A 65 inch screen and 4K resolution are factors that go into this rating. This TV also offers 4K Ultra HD TV, Android TV, Google Cast Built-in. This is just some features of this TV. Make sure to check out the specs tab for the full feature set. Every single person has different things they like when it comes to specs of a TV. This is why everyone's personal rating of a TV will be different.

The Ins and Outs
A quality picture is determined in part by the type of input that is connected. This television specs out with 4 HDMI ports , 1 component input , 1 composite input , 3 USB ports , 1 audio-in port , 2 audio-out port , 1 RF cable input , 1 ethernet port and WiFi. Four HDMI ports is the most common number of ports and should be more than enough for most people. The old composite style connections are rarely supported anymore and for a very good reason, it is ancient technology considering televisions of today. Component inputs are still incorporated into some Sony televisions due to their ability in that they are able to handle higher definition transmissions than composite connections. Built-in WiFi gives you a way to connect to the Internet. This gives you an endless world to explore through your Sony TV. Having an Ethernet port means you have a reliable way to get connected to the Internet. Connecting through an Ethernet port is a more stable connection and usually gives you more speed than WiFi. All in all, the hardware of a TV is just as vital as the screen itself. HDMI ports, internet connections, and even the audio out connections can influence the quality of your experience. Choosing the correct TV can not be done without studying the hardware of the TV beforehand! It is always in your best interest to take a look at the whole TV, not just how big the screen is!

Dimensions
The Sony XBR-65X850D offers up a nice 65 inch screen. Most of the time the screen size is actually smaller than the one listed. The XBR-65X850D has an actual 64.5 inch screen. By most accounts this is a very big TV and would be installed in the living room. Large screens tend to use more energy but can offer a breathtakingly large picture! Regardless of size, you need to choose a TV that works for you.

Smarty McSmart
This TV is considered a Smart TV and has Android TV installed as its main OS. There are quite a few applications that can be installed and ran for this Sony Smart TV. This Smart TV offers a number of apps you can use on the TV including Facebook, YouTube, Showtime, Hulu, and many more! Because of the fluid nature of system apps and other legal stuff, there very well could be different Android TV apps than what was previously listed. Always double check the available apps before buying any TV with the Android TV OS. You can never know anything without even attempting to look up current information about the Android TV system.

Screen Resolution
The max resolution this TV can display is 3840 x 2160 pixels. This particular resolution is often called 4K resolution. The term resolution means how many pixels wide x how many pixels high the screen displays. Resolution determines the clarity of the screen for a television as it does for a computer monitor, iPad or any other product that uses a display. Though vertical refresh rate, backlighting and panel technology all have an effect on display quality, too.

Overall Conclusion
So, this TV from Sony would be considered a really good choice based on our 87 in-house rating. All together with 4 HDMI portsits 3840 x 2160 pixels resolution screen, WiFi capabilities, and the Android TV operating system, the TV rating of 87 is spot on. Make sure you read over all the specifications on this television before making a decision on which one to buy. Double check to make sure it has all the things you are looking for in a TV.
Sony XBR-65X850D Parts and Accessories
Offering Sony XBR-65X850D parts like replacement remotes and HDMI cables. You may also be looking for accessories like TV mounts, home theater systems or sound bars for your 65-inch 4K with Android TV.
Sony XBR-65X850D Owner's Manual
This Sony XBR-65X850D owner's manual is available to download free of charge. The manual can be opened using any pdf reader freely available on the Internet.
The manual will contain important information about your Sony XBR-65X850D including specs, warranty, operation and troubleshooting. If you have any more questions about the 65-inch 4K with Android TV you may need to contact Sony directly via email, or by calling a customer service phone number.
Sony XBR-65X850D Techinical Specifications
Here are the Sony XBR-65X850D specs we have on record:
Check eBay for the Sony XBR-65X850D Here!